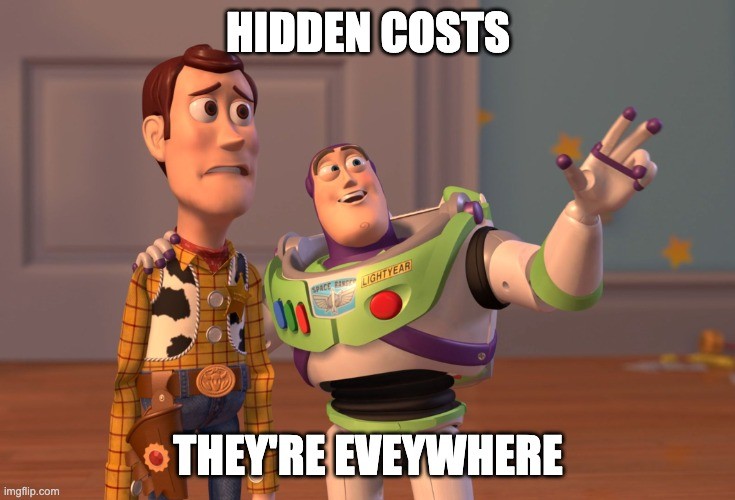 It's no secret that spending on Software-as-a-Service (SaaS) has been growing like crazy in recent years. Businesses increasingly need software tools, like Slack or Salesforce, to complete important customer-facing and internal functions. Gartner, an IT research and consultancy company, predicts that the market for public cloud services will grow 20% this year to a total of $494.7 billion. That's a lot of money!

But oftentimes, companies spend way more than they need to on these SaaS apps. In fact, up to a third of a company’s SaaS spending is wasted on hidden costs.

So, what are these hidden costs? They typically come from three main sources:

Let's take a closer look at each one.

One of the biggest hidden costs of SaaS is what's known as "Shadow IT." This refers to the practice of employees signing up for and using SaaS applications without the knowledge or approval of their company's IT department. Oftentimes, employees do this because they find an app they think will be helpful and want to get started using it right away…without having to go through the hassle of getting IT approval.

The problem is, when your employees sign up for these apps on their own, your company often has no way of tracking how many licenses you’re using, even what the app is being used for, and what data is at risk of being compromised. This can lead to wasted spending on apps that are abandoned or never used. And it can put your company’s data into tools that may not be secure.

Another hidden cost of SaaS comes from having redundant applications. This happens when a company has multiple employees using different apps that essentially do the same thing. For example, a company might have both Asana and Trello for project management, Slack and HipChat for team communication, etc.

The problem with having redundant applications is that it can lead to both wasted spending on apps that are never used and to chaos within your company. Employees can get confused about which app they're supposed to be using for what, and this can lead to frustration and decreased productivity.

The final hidden cost of SaaS comes from app renewals. Because most SaaS applications are subscription-based, they typically auto-renew each year. This can be a problem if your company is no longer using an app or if you’re using it less than you originally thought.

Because renewals happen automatically, it can be easy for any company to lose track of how much they're spending on SaaS apps overall. Before you know it, you could be spending hundreds or even thousands of dollars more than you need to on SaaS applications that you're no longer using.

Hidden costs and risk factors can sneak up on you if you're not careful. By being aware of the potential sources of hidden costs, you can save your company up to a third of what you spend on SaaS, and keep the company safein the process.

Curious how you can get a better handle on your SaaS budget? Try Talisman!

Talisman gives companies a complete picture of their SaaS spend and identifies opportunities to save money. Cost management is a lot easier when it’s all in front of you.